To prevent the solar panels and windmills from crashing the energy supplies in Denmark, there is a need for more knowledge about what is happening on the electrical grid. In the million kroner project Remote Grid Aalborg University, Thy-Mors Energi and metering company Kamstrup is looking to find solutions so that renewable energiy can be better utilized. 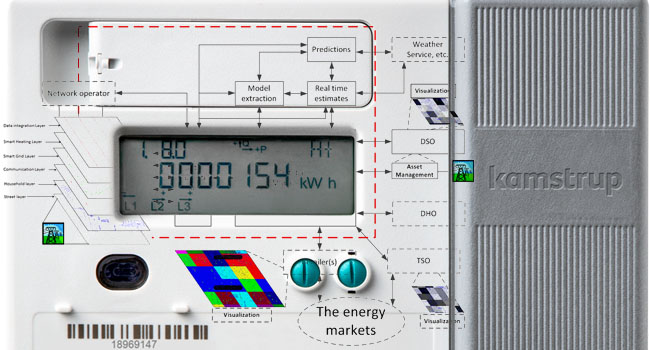 Previously, the electrical grid was a relatively manageable size; power plants sent electricity to consumers, everything was controlled and regulated, and the electrical current ran only one way. Today the picture is somewhat different. During recent years the number of private solar PV systems and wind turbines has grown tremendously and consumers deliver a great deal of electrical power back into the grid. And this changes the demands.

- Today, we know very little about what happens on the electrical grid. And it's a big problem if you want to put solar panels up or implement green energy that you have no idea how the condition is out there, says Associate Professor Rasmus Løvenstein Olsen from the Department of Electronic Systems.

- A classic scenario is an urban area where people have a lot of solar panels installed. People go to work, the sun is shining and the solar cells produce a lot of energy that is sent out into the grid. If the energy is not used, there is a risk that the voltage increases too much that it damages the infrastructure or leads to blackouts, he explains.

- Today you solve the problem by putting a lot of limitations on how much people can produce. But on this way we do not exploit the potential that lies with in wind- and solar power.

MONITORING from the METER BOX

In order to prevent the green energy to become a threat to the stability and security of the electrical grid, AAU joins ranks with the metering company Kamstrup and the energy producer Thy-Mors Energy in the project, Remote Grid. Here the data from remote readable electricity meters is being used to draw a more accurate picture of how the electrical current flows on the power grid from minute to minute.

Today, the electricity meters is used for billing of power consumption, which is read either once or twice a day or less, but in the Remote Grid project the electricity meters must provide monitoring data to the energy companies all the time. This allows energy producers to constantly keep a detailed track of how individual households’ energy consumption looks like and eventually draw a pattern of how and when people use energy in their homes.

- You can actually see in great detail what is happening in individual households; when are you watching TV, when are cooking, when do you turn off the light, Rasmus Løvenstein Olsen explains.

At Thy-Mors Energi, supplying the electrical infrastructure to the project, it is expected that the knowledge that comes out of the project, can make network management more efficient.

- We have already invested many millions in remote reading systems on our network. And it is clear that we want more out of the knowledge that comes in, says technical manager Peter Melgaard.

- It is of great advantage that we can see how consumption develops - whether there is a risk that errors occur, if transformer stations are overloaded or overused or other things we have to respond to before an error or crash occurs, he says.

- The network is far more pressured than before. And the more we know about what is happening out there, the easier we can manage it and prevent an incident, Peter Melgaard explains. – That is, however, if one is able to better sort the knowledge that comes in, he adds.

When you start to collect, correlate and pass data that can be put together with people's behavior, it can change character to sensitive personal data. Therefore it should be treated as such according to Professor Søren Sandfeld from the Law Department of the AAU, which is also a partner in the project.

- It is an area that is growing rapidly in the context of increasing digitization and collection of what we call big data: Who will it be disclosed to? How is it stored - and for how long? What is it for? There can be sensitive information - when interfacing with other information - that can be used to monitor people's behavior, he says.

- We are part of the project to ensure that the existing legislation on personal data is respected. It would be a shame to spend millions on developing a new system, which then turns out to be illegal.

Because of the sensitive information about our electrical consumption should not fall into the wrong hands, the Remote Grid project is also working to find an effective protection of incoming data.

Meter boxes are not on the Internet, but transmit data over a separate network. Still there is a need to ensure that they are adequately encrypted, says Rasmus Løvenstein Olsen.

- You can make a maximum security system running slowly because you constantly have to spend time and power to protect data - or you can have a completely open system that runs super-fast, but overturned if there is a hacker attack. We must strike a balance in terms of how safe the system should be to provide data fast enough to be genuinely useful, he says.

Therefore, the researchers will simulate various types of cyber-attacks on the meter boxes. However, not on Thy-Mors Energy's customers, but the AAU's test bed, which is one of the world's most advanced grid simulators.

- Here we can let go and try all the different attack scenarios without compromising anyone, says Rasmus Løvenstein Olsen.